Humanity has been crafting guardian totems since the dawn of time, creating more and more elaborate constructions as the ages moved on. The wooden totem poles in small villages eventually gave way to exquisitely sculpted stone guardians standing atop city walls or massive cathedrals. Each gargoyle is chiseled from stone to be a unique structural feature. The particular form of a gargoyle is entirely dependent on the sculptor and the desires of the patron who commissioned the work. Many different styles of gargoyle have been fashionable throughout history, but most often they incorporate both bestial and humanoid features.
Gargoyles were meant to be mere decorative fixtures with the superstitious secondary function of warding away evil spirits. As the study of magic developed and the Animator school emerged, guardian statues began to serve more practical uses.

In times of trouble Animators would turn to the city gargoyles for a quick and ready supply of guardian constructs. These strange half-stone monsters are similar to living statues and golems- they are brought to life by Animators infusing anima into sculpted stone. Far more sophisticated than simple animated objects gargoyles tend to have more developed and unique personalities. It is believed that decades of lurking high up on city structures instils a special kind of animating spirit into these constructs. The subconscious fears and dreams of the citizens far below seeps up through the stone, so that an animator simply needs to expend a small spark of anima to 'wake up' these watchful but slumbering guardians. The cumulative imagination of the citizens quite literally inform the personality and behavior of a gargoyle once it is 'awakened'. 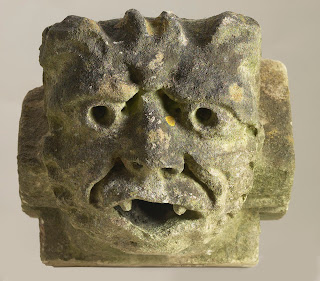 Gargoyles are usually winged but that is not always the case, although non-winged gargoyles would have a considerably more difficult time traversing the city and tend to be even more territorial in defending their ledge or perch than their aerial cousins. Winged gargoyles are unsurprisingly stiff and clumsy fliers, but it is quite miraculous that they are capable of flight at all. Scholars believe the same telekinetic energy that allows animated objects to move  is used by gargoyles to somehow change their gravity. In effect gargoyles are able to 'fall' in the direction of their choosing- laterally or even vertically upwards, this control is far from perfect however and is constantly in conflict with the real forces of gravity acting upon their cumbersome stone bodies. 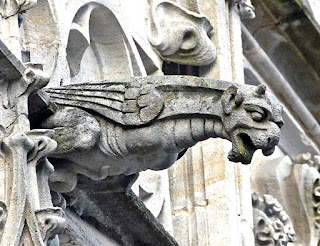 Unlike standard animated objects, awakened gargoyles require a degree of mobility and flexibility not normally found in stone. The stoneflesh spell makes this mobility possible, allowing stone to flex and bend without breaking- although superficial cracking will be visible around joints. Gargoyles are notoriously easy to 'awaken' - even tiny amounts of anima being sufficient. The stoneflesh spell is a much more difficult spell to use and expends a considerable amount of arcane energy to maintain. This combination of factors means many supposedly inanimate gargoyles in a city could in fact be fully aware but trapped and unable to move. Frustration after years of imprisonment may explain why there are many known instances of gargoyles acting with violence and hostility. Gargoyles are notoriously difficult to command and prefer to be left to their own devices, very often going rogue and ignoring the orders of their "master". 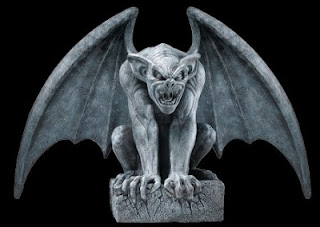 The first rule of Animating magic is Function Follows Form.  Judging by this law we can see that the personality and behavior of a gargoyle depends largely on it's outward appearance. Therefore a sinister and cruel looking gargoyle will usually act accordingly.  Gargoyles do all seem to have a wide territorial streak, jealously guarding their particular ledge and generally being protective of the structure they inhabit. Some gargoyles enjoy their role as city guardians and have been known to help or rescue citizens in distress. More malevolent gargoyles view the city inhabitants as vermin and inflict casual acts of violence against them.

Gargoyles are fascinating and unique creatures which are very reflective of the society that creates them.
Posted by Pierce at 10:49 PM